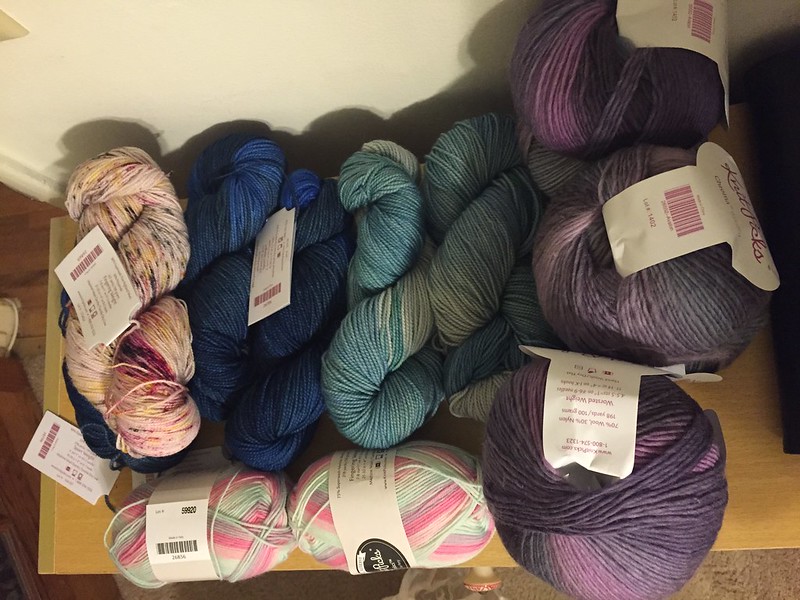 Our Current Fix:
Jill is very close on her Jenica Hoodie.  She's hoping to finish it by the end of Monday, but doesn't think it'll happen.  She managed to work on her Beechwood Cowl by Melynda Bernardi during a work conference.  She's using Kathmandu DK to match her Beechwood Hat.  She is partway through spinning 70% Oatmeal BFL/30% Silk from Wool Gatherings.  She has 8 oz, and still has 4.5oz of singles still to spin.
Michele is working on the Lyndhurst Cowl in Bernat Multi-Ply in the Highway colorway.  She is using her Lion Brand Heartland to knit the Black Death Shawl.


What We're Jonesing For:
Michele just learned of the French Cancan pattern by Mademoiselle C.  She might even use Caron Simply Soft.  She also likes GingerSNAP by Erika Flory.  She is intrigued by the recent Stephen West MKAL, The Doodler.  We then talk about lots of other Stephen West patterns.
Jill has a ton of new patterns that she has bought.  She won the Solaris pattern by Melanie Berg from a Yarniacs Podcast giveaway.  She wants to start the Jollyoly hat by Hanna Maciejewska but her yarn might be too variegated.  She aspires to the Shakespeare in Love sweater by Carol Sunday.  She wants to make Tiong Bahru by Asa Tricosa.  She also loves the #1 Mock-Neck Shift by Brooke Nico from Vogue Knitting Holiday 2015.
Jill tries to talk Michele into the father cables hat by Veronika Jobe.
Flieder hat pattern by Olya Bagi
Danzig by Justyna Lorkowska

Uppers, Downers and Miscellaneous Links:
Almighty Opp, an avant-garde(?) puppet show on the corner of Elmwood and Western in Korea Town in Los Angeles.  Here's a write-up about it. 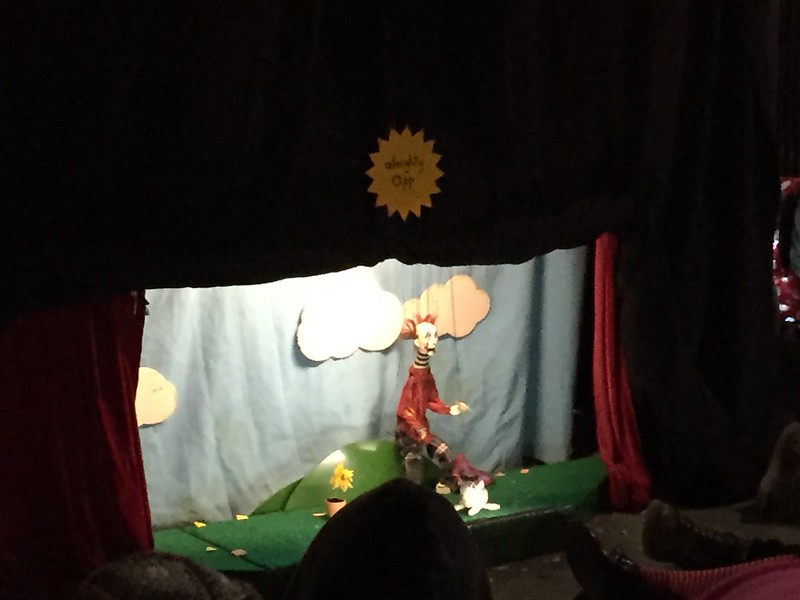 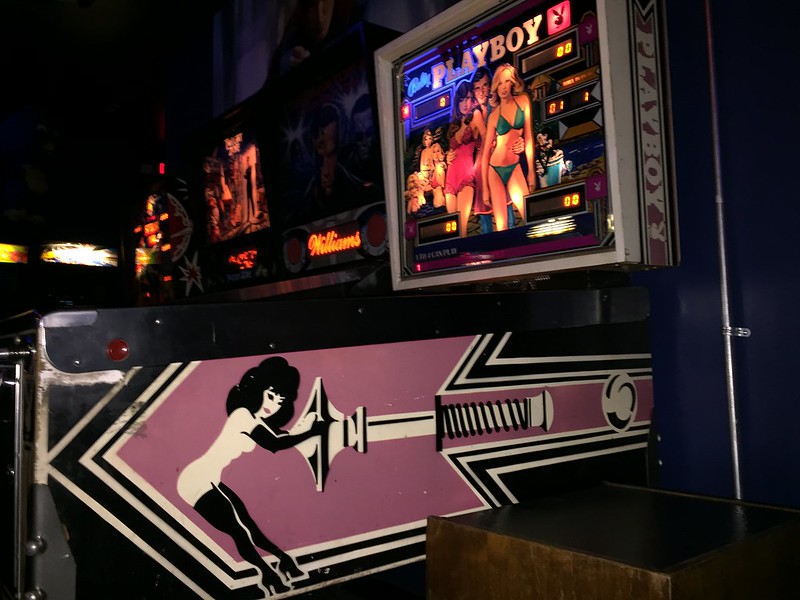 Our Current Fix:
Jill is only working on her Jenica Hoodie out of Cascade Ecological in dark natural brown.  She has finished the bunny baby booties, using the Animal Friends Felt Baby Booties pattern.  She used Lamb's Pride Worsted, some old handspun and Cascade 220.  Her Rav page is here.
Michele will continue her old projects but has lost interest.  She will start the Braided and Broken Wrap by Cre8tion Crochet in Lion Brand Heartland.  She is also going to start the Lyndhurst Cowl in Bernat Multi-ply in grey/yellow/black. 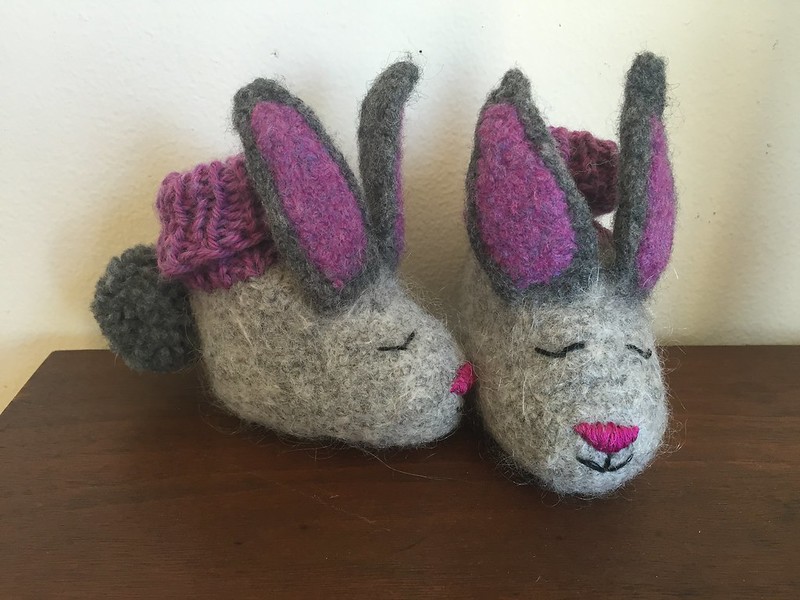 What We're Jonesing For:
Michele has been looking at cowls.  She is looking at the Bandana Cowl by Purl Soho.  Another free crochet pattern is the Forest Fog cowl.  She likes the Katniss Cowl by Kahi Dahls.  (There are a ridiculous amount of different takes on this pattern out there.  Just search Katniss to find them all.).  She likes how Outlier by Laura Aylor looks like a shawl, but is a cowl.  She loves but will never make the Pop Blossom Cowl by Thea Eschliman.  There is also a hat pattern of it.

Jill is obsessed with a bunch of different patterns.  She loves the DC superhero christmas ornaments by Lexie Bryan. She also bought the Oh Christmas Tree hat by Jenny Wiebe, and the pattern purchase goes to a good cause.  She thinks Waverleaf by Faye Kennington would be a good stash busting project.  It may also be a pattern that is part of the Indie Design Gift-a-Long.  (Check out that group!  The Gift-a-Long starts November 19 and runs through the end of the year.)  A pattern that will definitely be part of the Gift-a-Long is the Persian Dreams Worsted weight blanket by Jenise Hope.  There is also the Venus Cowl by Alexandra Davidoff which would be great for a gradient yarn. 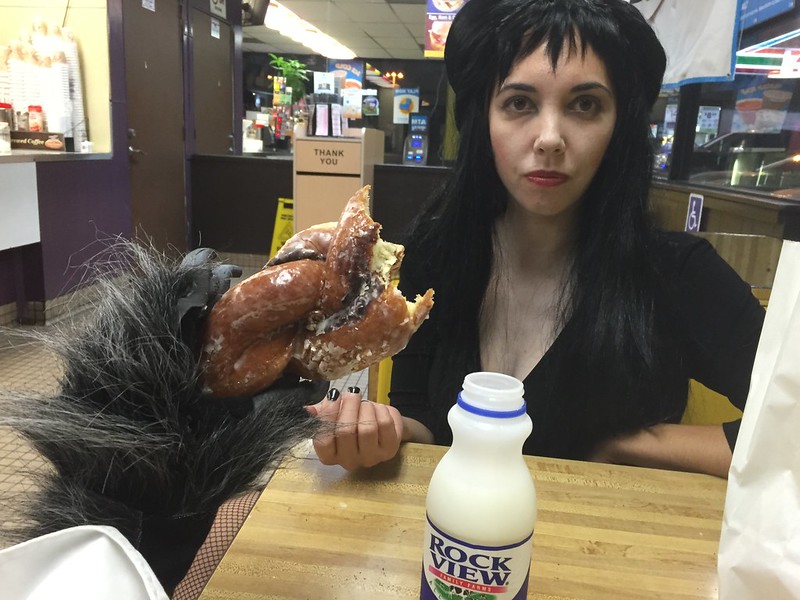 Our Current Fix:
Michele has been totally sick and has made zero progress on anything.  Jill finished her Downton Pullover for the FIFO CAL!  She also made the Beechwood Hat by Melynda Bernardi from the Midwestern Knits book.  Her Rav page here.  She has started the matching Beechwood Cowl in Queensland Collection Kathmandu DK in a peachy taupe tweed.  She's also started some Animal Friends Felt Booties from Fiber Trends.  She is making the bunny booties out of Lamb's Pride Worsted in Grey Heather. 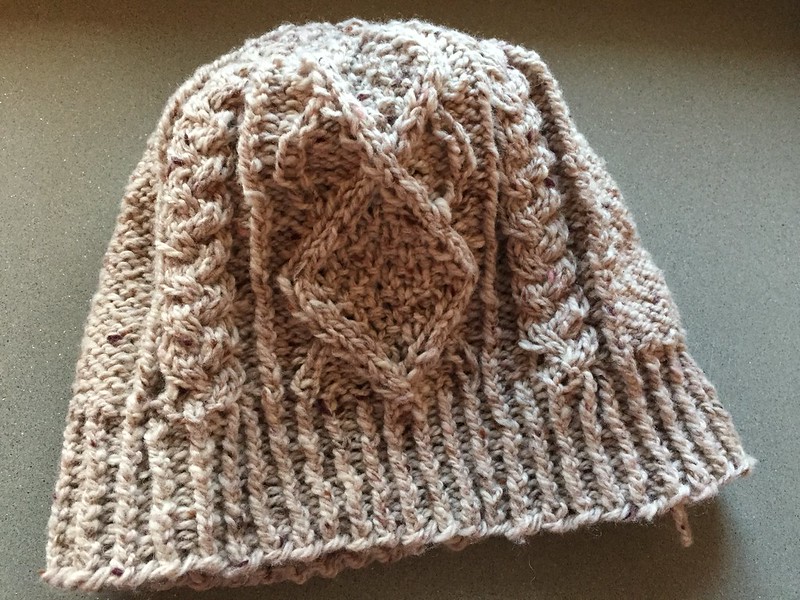 What We're Jonesing For:
Jill once again picked something by Ambah O'Brien, the Inara Wrap.  She gets Ambah confused with Melanie Berg, who she also loves.
Michele has found her Knit, Swirl! book and is interested in Copper Collage, Strato Sphere and Shades of Grey.

The First-In-First-Out Craft-a-Long is done!  We've drawn for prizes, so listen to the show to find out if you've won.  Contact Jill (nodice), if you're a winner!

Waist Enhancement:
Roscoe's Chicken and Waffles frozen waffles.  There are 6 locations in Los Angeles.  The restaurant webpage is here. We heartily recommend the restaurants.  Michele is very into the frozen waffles and Jill likes them.
Aunt Kizzy's Back Porch has closed!  They are looking for a new location.
Another Los Angeles restaurant we'd recommend is Philippe's downtown.
Whataburger in Texas