We've extended the First-In-First-Out Craft-a-Long deadline until October 31!  Get those projects in!

The Cat Burglar sweater (this is for my crazy cat lady costume a few years back): 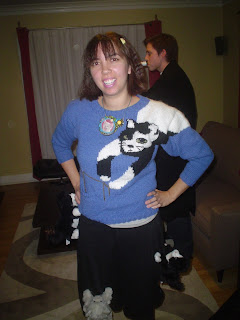 Our Current Fix:
Jill has finished her 22 Leaves Shawlette for her coworker.  (no pictures here because Flickr hates her and won't let her embed pictures...)  She is still cranking along on her Downton Pullover.
Michele has worked a little bit on her Clincher, but has mostly been swatching and starting her Saturn Sweater.

What We're Jonesing For:
Jill bought the latest pattern by Joji Locatelli, Recoleta.  She also enjoys the beezee hat by Katrin Schubert, a 2-color brioche hat and the Jasmine scarf by Purl Soho.
Michele is loving the Sexy Vesty by Teresa Gregorio, the Fremont Market shawl by Danielle Morgan, and the Steamed Broccoli Floret pattern by Sara Elizabeth Kellner and especially chalklegs's version of it.

Uppers and Downers:
The Americans  on FX
Star Wars fabric at JoAnn's