Lots of traveling chatting before the knitting content.  Knitting starting around 15 minutes in.  So sorry for the delay guys!  We'll try to stay on schedule!


Current Fix:
Michele hasn't been knitting much but is still working on her Mielie Vest by Hilary Smith Callis and Clincher by Ash Kearns.

Jill is working on the Crazy Stripes Tee by atelier Al-fa in Malabrigo Sock.  She also started a Cerise curl from the Curls book by Hunter Hammerson out of Araucania Atacama.  She is also four clues into the Sophie's Universe CAL blanket out of Knit Picks Brava.

What We're Jonesing For:
Jill has picked some vest patterns for Michele's next project.  She suggests the Impression Vest by Meghan Jones, Napoleon by Berroco, Sexxxy Librarian by Lilith Ubbelohde, Loro Vest by Cirilia Rose and the Vine Lace Vest by Cecily Glowik MacDonald.  Michele is most excited about the Impression Vest.

Jill is obsessing over complicated shawl patterns.  She has some Madtosh Merino Light she just purchased to make Oceania by Kieran Foley.  She is also still thinking about making Fox Paws by Xandy Peters in Knit Picks Palette.

Highs/Lows (Uppers and Downers?):
We mentioned some books.  Sea Biscuit by Laura Hillenbrand, Catch-22 by Joseph Heller for Jill.  In the Garden of Beasts by Eric Larsen, The Martian by Andy Weir for Michele.

The KnitScene styling we mentioned: 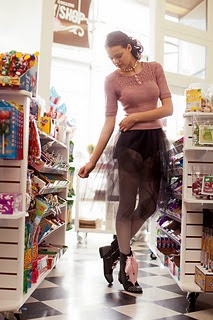